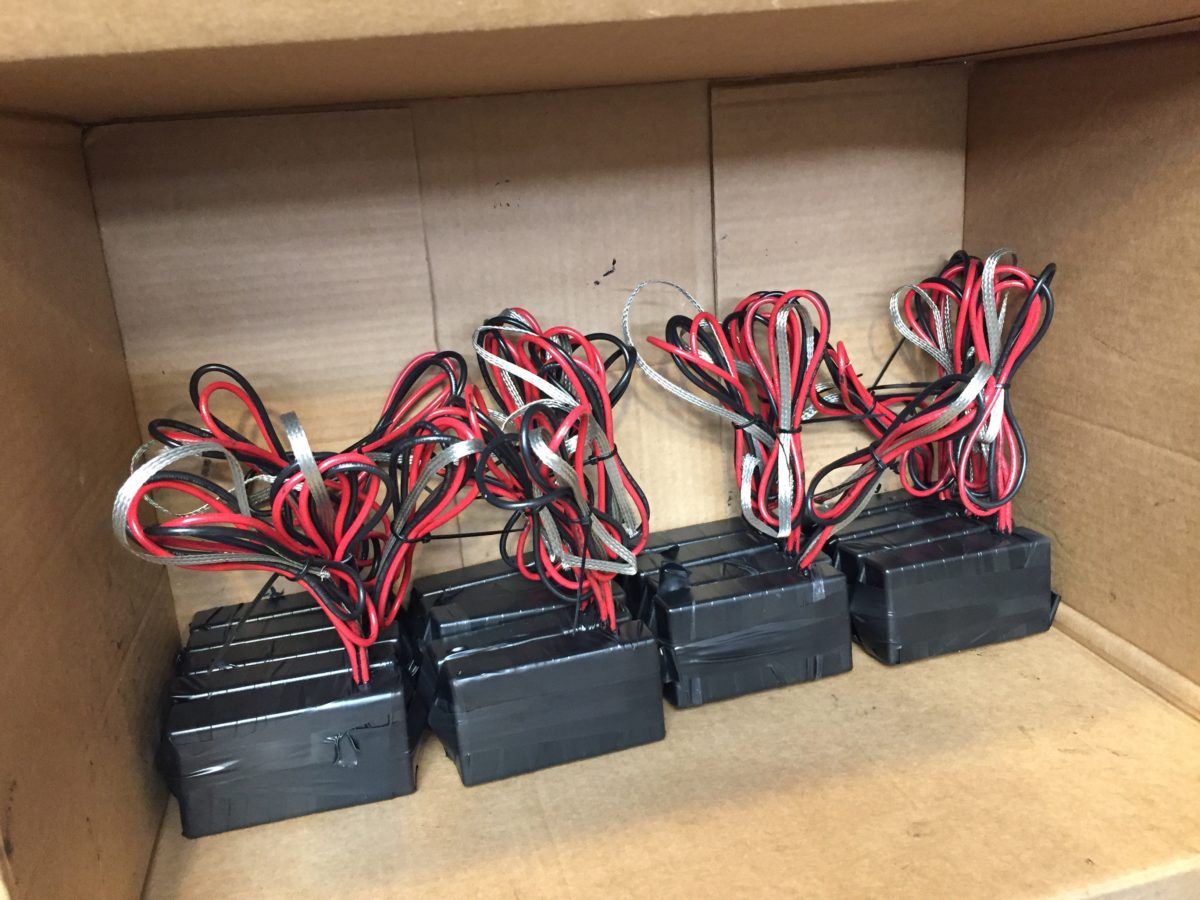 Epoxy Encapsulation (potting) serves to waterproof the SKBOWEs, insulate them from vibration, prevent corrosion, and conduct heat away from the components to the enclosure. It’s the messiest and trickiest part of the build process, as there is no turning back once you’ve mixed a batch of compound – and it’s $260/gallon.

The next step after electrical assembly is potting. The wife was nice enough to take some pictures of the process so I could do a quick writeup on the potting (aka encapsulation) process using MG Chemicals Thermally Conductive Black Epoxy Encapsulating and Potting Compound. As I said this stuff isn’t cheap – one 0.45 gallon kit costs around $120 and does about 20 pairs of SKBOWEs.

I mixed half of the kit at a time (1 solo cup of each part), which worked out perfectly, I had 30 minutes of open time left at the end of 20 units. The key to working with big batches is to have everything you need ready to go so you don’t waste open time and end up with a hardened pile of $hit. In this case, I jigged up a holder, positioned all the tools where I would need them, and opened the glue before mixing.

This stuff is super goopy (viscus) with the consistency of cold honey, but it needs to be mixed throughly and precisely applied. Each container transfer wastes a non-negligible fraction, so I opted to go for mixing and dispensing from a 1-gallon ZipLoc freezer bag. Just pour the stuff into the bag and kneed it for 5 minutes or so. Of course mixing this way introduces a ton of air, so it’s a good thing I picked up a vacuum apparatus to degas it. Just let it sit at near vacuum (pump says it’s good down to 5Pa absolute or something) for 5 more minutes.

Now the fun begins. Step 1: Two pre-fit units (one pair) are inserted into the jig. Pushing the wires up from the bottom easily pops the components out of the enclosure.

Step 2: Bottom fill about 1/4″ of compound into the empty enclosures. You can use a ZipLoc like a piping bag by cutting off one of the corners – this gives a ton of control and wastes very little compound.

Step 3: Reinstall The dry fit (initial assembly) is absolutely critical – part of that is bending the wires to fit the cutout and adjusting the heatsink and spacer. Once the goop hits the board and wires, any further adjustment is a sticky proposition that takes forever. After the dry fit, it the wires stay bent and it pops back in.  Once the potting hardens around these bends, they will serve as a strain relief and prevent forces on the wires from pulling at the solder joints. Braid doesn’t need additional strain relief because the compound grips the texture strongly.

To seat the board completely, gently push down on the caps, spreading them slightly (the board has some flex) to allow compound to flow between them, ensuring thorough encapsulation.

Step 4: Reinstall the heatsink and spacer. Again the dry fit is critical because once the heatsink is covered in goo adjustments are literally a giant mess. If the PCB wasn’t aligned correctly, the spacer nudges it into position.

Step 5: Topcoat of potting compound, focusing on the gap between the PCB and enclosure that the diodes live in (most heat/highest vibration risk). The bottom layer + topcoat is the key to a complete encapsulation with minimal waste. If too much goes in on the bottom, pushing the board and heatsink in causes the enclosure to overflow. If everything goes in on the top, the bottom is not encapsulated sufficiently, there will be large air bubbles, and most of the compound will be pushed out around the edges of the cover.

It took quite a bit of practice to zero in on the ideal topcoat amount – it’s a lot less than I initially thought. I suspect that the PCB is “floating” in the bottom layer, and installing the cover forces it down and the displaced compound fills the gaps under the cover.

Step 6: Apply ABS cement. While the BPF compound is technically adhesive to ABS, you get a nearly instant chemical bond with ABS cement. This particular jar is called “extra special medium ABS cement” – not sure what it did to deserve such a title – but it does work well. Solvent based cements like this actually melt the two pieces together for a permanent bond.

Step 8: Press firmly for 15 seconds. This is how long it takes for the ABS cement to get an initial grab.

Step 9: Clamp. Aggressively wrapping with cheap Harbor Freight electrical tape (which has virtually no adhesive) clamps the enclosure and seals the gap between the cover and case. This will come off after cure.

Step 10: Revel in finished unit, before realizing that you have 51 more to do…

And that’s a wrap!

Rest them until the working time (2 hours) is up. This prevents massive leaks down the wires, though some leakage later is unavoidable.

After they are cured, I’ll crimp the connectors, test each one, and prepare for shipping!