The headlights of Volvo P1 vehicles1 are controlled by the Central Electronic Module (CEM), located inside the passenger compartment just below the glovebox. You probably know it as just the “fuse box”, but the CEM is actually a sophisticated computer module that is the backbone of the vehicle’s interior and exterior electrical system.

To understand why HID retrofits are so difficult on the P1 chassis vehicles,  we must explore how the vehicle controls the headlights. So let’s dive in!

Role of the CEM in the P1 CAN

The Volvo P1 chassis has a complicated Controller Area Network (CAN) with many different computer modules that perform all electrical functions from rolling down the windows to running the blinkers to coordinating anti-lock breaking. 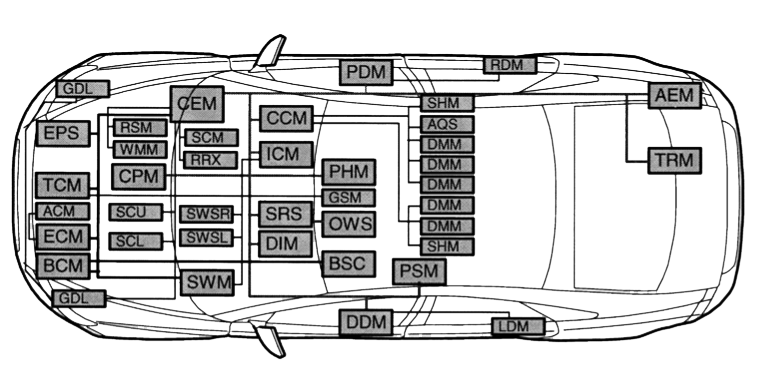 The CEM is the central hub of this network, and communicates with all other vehicle modules over High Speed and Low Speed CAN and with diagnostic tools like Volvo DiCE over the OBD-II connector.

The modules chat with a pre-determined set of regular messages compiled by a software called Volcano, which establishes “virtual wires” between modules. At design time, the non-networked sensor (signal), actuator (output) and activation (boolean flag) are defined for each electronic module. The Volcano Network Architect (VNA) design software does a static timing analysis of all signals and their required update rate and packs them into frames which are transmitted in time slots to meet the requirements. When modules need a signal, they get a configuration file which tells the Volcano Target Package (VTP) which frames to decode, and what type of data is in those frames (if a expected signal is missing from the timeslot, the module stores a DTC).

For example, if there is an error with one of the headlight circuits, the CEM sends a message to the DIM (Driver Information Module), which then displays the dreaded “Low Beam Failure” warning to the driver.

In addition to passing messages between modules, the CEM also directly controls many of the 12V outputs in the vehicle, from interior lighting to climate control. The two outputs we are interested in are for the left and right low beam circuits, which produce the problematic 82HZ PWM signal that prevents HID ballasts from working correctly. It also reads many sensor inputs, like the exterior temperature sensor, the interior climate sensor, headlight switch (LSM) position, and the twilight sensor (among many others). It is the twilight sensor that is responsible for enabling the DRL program that drops the PWM duty cycle down to 50-60%.

Before now, we knew from the owners manual that there were 7.5A fuses on the headlight circuit, and that there was PWM voltage regulation from the electrical design document, the wiring diagram, and real-world experiments. But beyond that, there was not much to go on in terms of how the thing actually worked.

So without further ado, here are the pics from the CEM teardown…

Top view of CEM, as it sits when installed in vehicle. Under the upper plastic cover is the power board, which holds all fuses and relays. It pivots upwards into the space under the glove box, protecting the components from kicking feet. 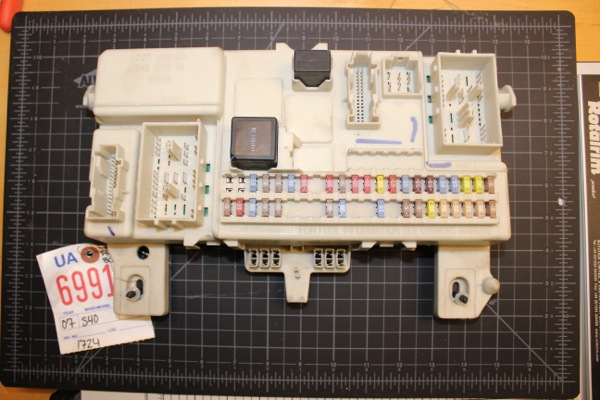 Here is the bottom of the CEM, that you see when looking up at it when installed in the vehicle. Under the lower plastic cover is the logic board. 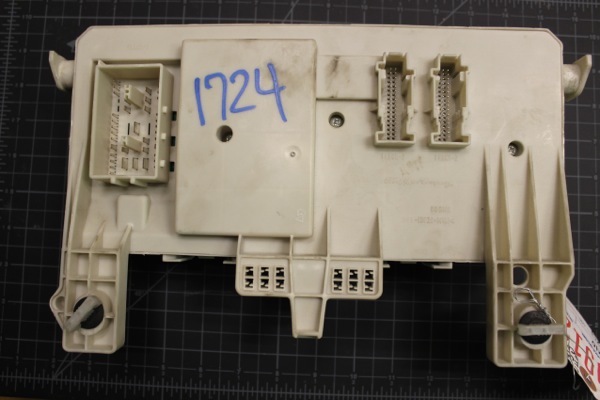 Just a friendly reminder that Volvo sold their soul to FOMOCO: 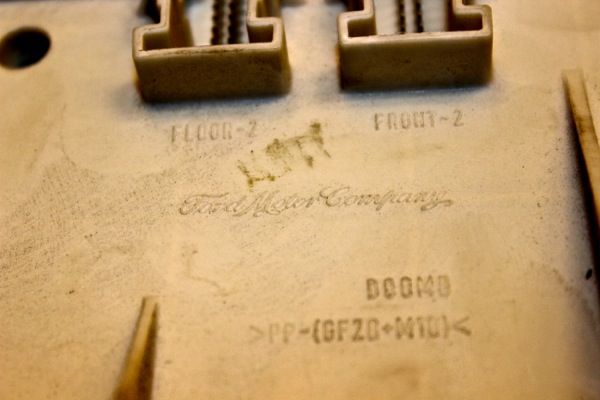 The CEM from the top with all the fuses, relays, and screws removed. We’re going in! 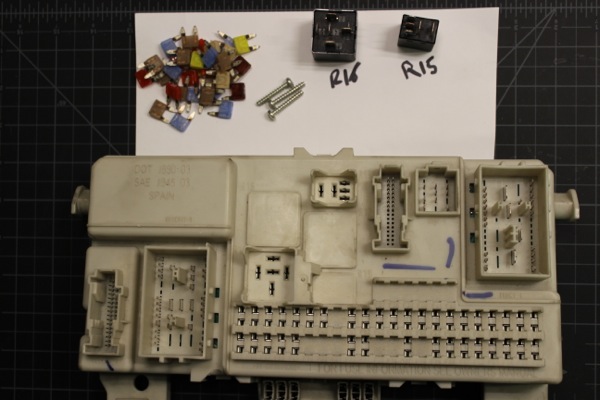 In my experience, the best way to open this sort of case without breaking anything is to carefully disengage one locking tab at a time with a thin spudger (or screwdriver). Then, insert a paper clip or zip tie to prevent it from locking back together. Once all tabs are shimmed out, the case just falls apart. Here we see all the zip-ties inserted, ready to dismantle the top and bottom cases. 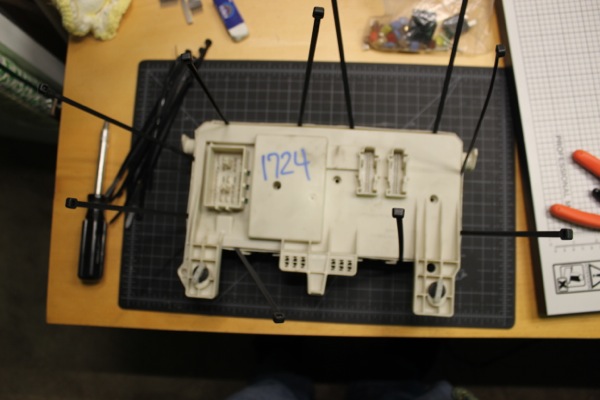 With the bottom of case removed, we expose the multi-layer logic board. There is a small, 2 layer auxiliary power board for the Floor-1 connector, which is both electrically and structurally connected using thick jumper pins to the logic board. This odd construction is presumably due to limitations on their pick-and-place or reflow setup – or for cost savings by reducing the multilayer area – or for better noise isolation, by physical separating ground planes – who knows… It’s strange for sure. 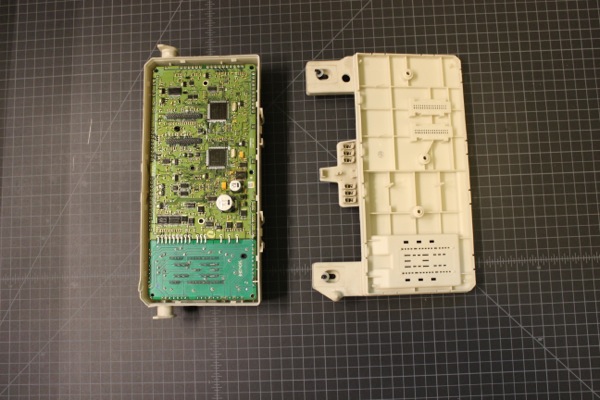 Close-up of logic board side, still in installed in the upper case. This is a 5 layer PCB (3 layers, 2 planes) with a conformal coating, making it very difficult to follow traces and identify components. Notice the thick pins around the perimeter which structurally support the board – more on this later. 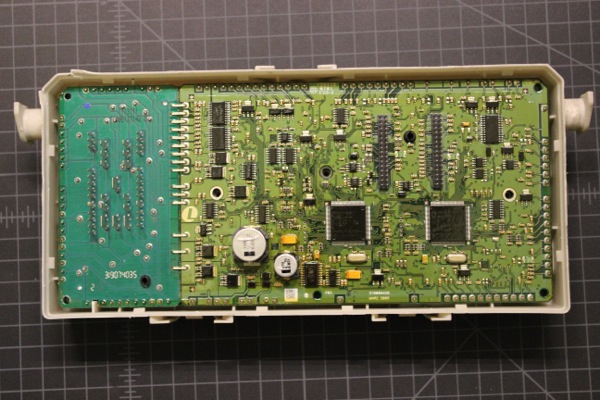 Here is the power side, with the PCB assembly removed from the upper case. Strange that there are five hardwired mechanical relays (non-replaceable), in addition to the two replaceable relays R15 and R16 – probably a cost-saving measure. The power board has only 2 layers and no conformal coating, so it super easy to follow traces. All contacts are tin plated (rather than silver or gold) as would be expected for an interior component. The more expensive platings are reserved for the corrosive environment of an engine bay. 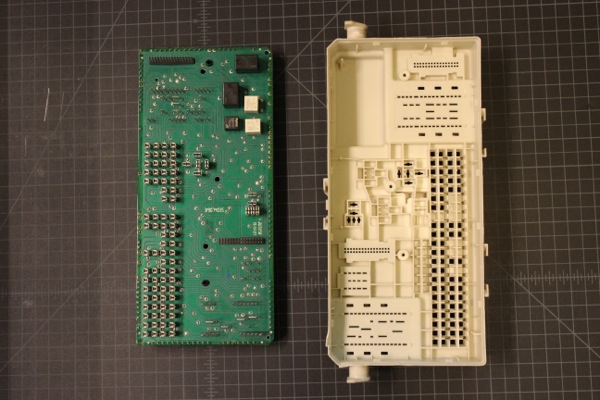 At this angle, we see the complete CEM internal PCB assembly as seen from the side. It is a very elegant design, there are no additional connectors or lead wires. It is entirely self-contained, mechanically self-supporting, and includes all pin/terminal contacts. The lower and upper PCBs are structurally and electrically connected using thick jumper wires which provide significant rigidity in both compression and tension, and there is a plastic insulator/spacer which provides some additional compression strength towards the center to prevent deflection when plugging in connectors. 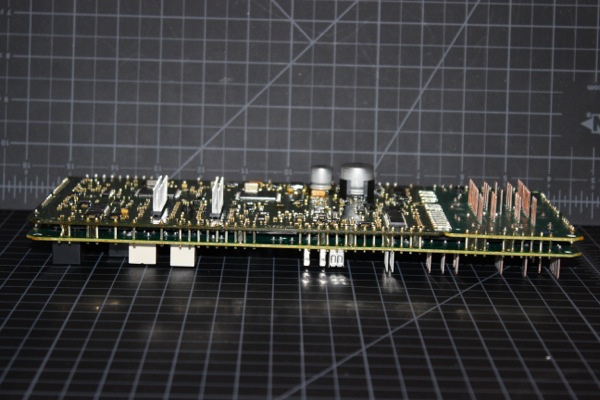 A closeup of sandwich assembly shows the insulating spacer and connecting terminals . 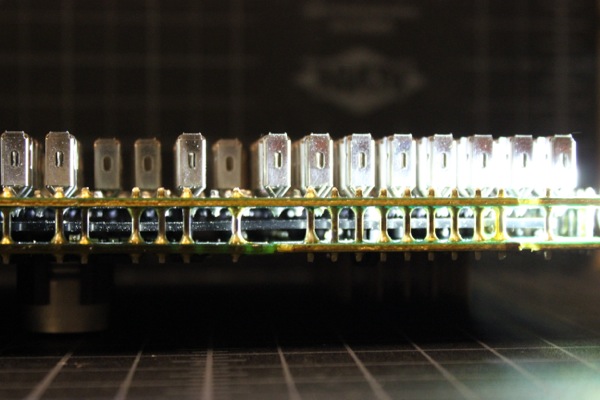 Now comes the point of no return – slicing the sandwich apart by cutting each of the connecting pins. This allows a view of the reverse of logic board and it’s tag-along auxiliary power board. 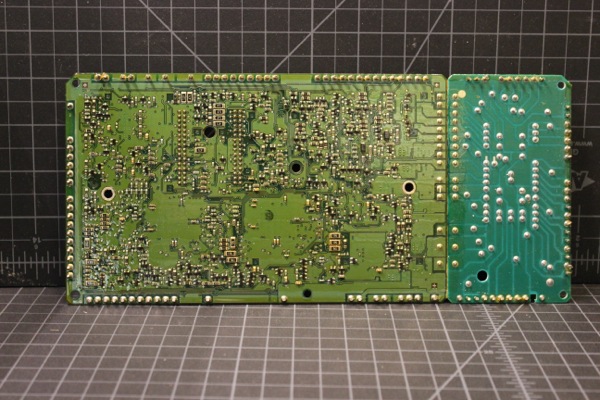 And the back of the power board – clearly designed by a different team using different layout software – just look at how organic the traces are! Very pretty. 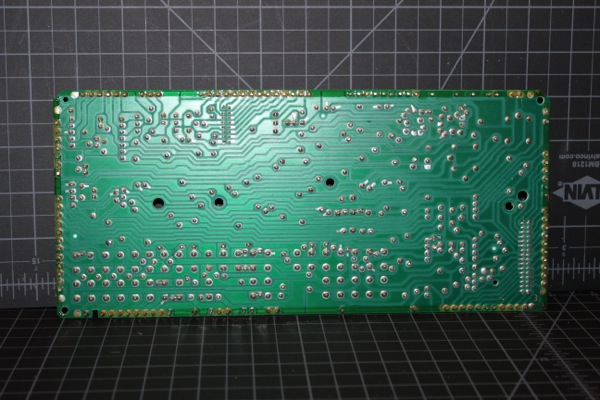 All of the parts of the Volvo P1 CEM have been unmasked. This CEM isn’t going back together any time soon. 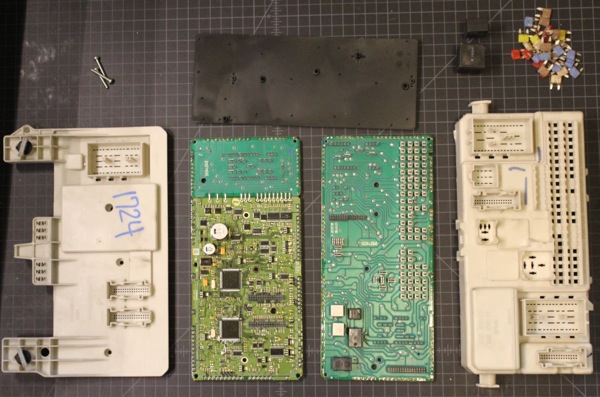 Next, I separated the logic PCB from the auxiliary power board. This is really the brains of the CEM. 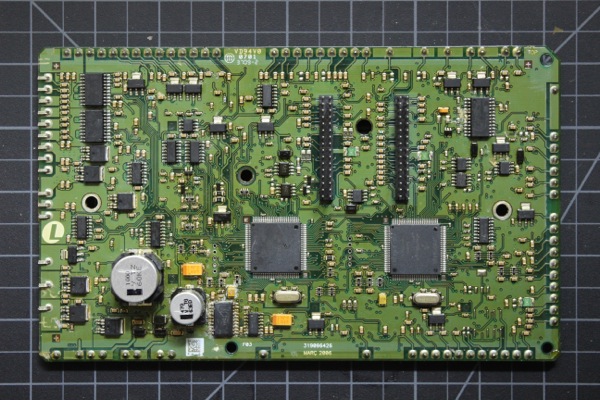 Neither heat nor solvent would affect the conformal coating, so I resorted to good-old-fassion scraping away. It took several hours to expose and identify all of the major components (click to enlarge):

As noted on Wikipedia: the Ford C1 chassis vehicles (including the Volvo C30, S40, V50, C70 , Mazda 3, and Euro Ford Focus / cMAX) share many common electrical system component production lines, including the tooling and connectors for the CEM (outside of Volvo, it is usually called a Body Control Module or BCM). However, there are differences between the Volvo version and the Ford/Mazda version – notably the Volvo version has different relays blanked off. In the 2009+ Focus, they kept the same mounting location but reworked the layout. The lineup below shows the different styles:

While the tooling, mount location are common, there are major differences in the internal guts – the fuse values are all different, the Mazda version is missing most of the pins which shift between each, relays positioned differently – so it’s not exactly fair to say that the C-platform cars “share an electrical system” in that entire components are the same between makes. However, the 10-year Ford-Volvo-Mazda C1 alliance did achieve a high degree of commonality which helped keep the price of all three lines down.

To be clear though, the Ford Focus BCM and Mazda 3 BCM are totally different beasts than the Volvo P1 CEM, both in hardware and software, and only the Volvo C30/S40/V50/C70 need the SKBOWE PWM Filter for HID retrofits when doing an HID conversion. I’m no expert on Ford and Mazda, but from a quick Google search, both seem to work fine with a standard relay harness… Leave it to Volvo to come up with a ridiculous 80Hz PWM Voltage Regulation system.